Good to Be Green 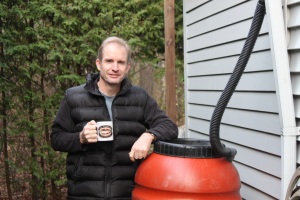 I’m an environmentalist. But like all modern Americans, it’s easier to preach than really practice. I drive a hi-mileage car, but wish I drove a Porsche. I yell at the kids to turn off lights, but we have a 50 inch plasma TV. Life is better when my wife is happy (and warm), so we have a hot tub too. But I’m always looking for ways to do better. This year it was the Rain Barrel project. The concept is simple. We water a lot of plants in the summer, so rather than draw from the well, why not catch nature’s bounty off of my roof and into a barrel? Free water! So sensible. And unlike solar panels, it seemed straight forward enough. Or so I thought.

My town advertised that they had barrels for sale. Free would have been better, but I figured they must be cheaper than buying new. That was wrong. I paid $40 for a giant piece of molded plastic with a faucet in the bottom. In terms of color choice, my new barrel came in one: traffic cone orange. So it basically blends right in with our house and yard. But I wasn’t done. I had to buy a downspout diverter which is the thing that taps into your rain gutter pipe and allows you to fill the barrel. This required quite a bit of research online, and another $30.

Now, I had to find the right spot for it. I proposed to put it next to the downspout that collected the lion’s share of the roof’s water, but that was also the one right next to the street. My wife Lori, who still retains a modicum of dignity and pride at this point in her life, objected to the curb appeal of a massive pumpkin colored cylinder in front of the house. So I had to settle for a much less productive spout in the rear.

Following instructions, I went after the gutter pipe with my hacksaw, which took about an hour of patient sawing to finally cut through. With a 3 story house, my downspout is roughly 30’ long and it turns out that when you sever such a tall, thin piece of metal. it becomes extremely flimsy. The pipe, formally flush to the siding, immediately began sagging away from the house in a decidedly slipshod fashion. And the copious amounts of duct tape needed around the mid-section to attach the diverter hose to it contributed to the overall sense of unprofessionalism.

Still, I was making progress. Free water from the skies was nearly in my grasp. It was then that I discovered that with the faucet at the very bottom of the barrel, which was resting on the ground, I couldn’t put a thimble underneath it, much less a watering can. So now I needed to raise the barrel.

The first attempt to do so involved a milk crate draped in a piece of black cloth that I hoped would make it look less like an orange rain barrel teetering on a milk crate, but in fact just looked stupid. Worse, it was not what we engineers like to refer to as “stable.” So with the first rain, and the exciting promise of stored water, the barrel became top heavy and fell heavily into the side yard, ripping out hose, diverter, duct tape and yanking the downspout even further from the house.

But I would not be denied. I was off to Lowe’s for $25 in paving stones with which I constructed a more stable rain barrel podium that looked slightly less crappy than my milk crate version.

And with that, success! For just $95 and three or four hours of my time, we are now saving about 79 cents in water every summer!

This entry was posted in Uncategorized. Bookmark the permalink.